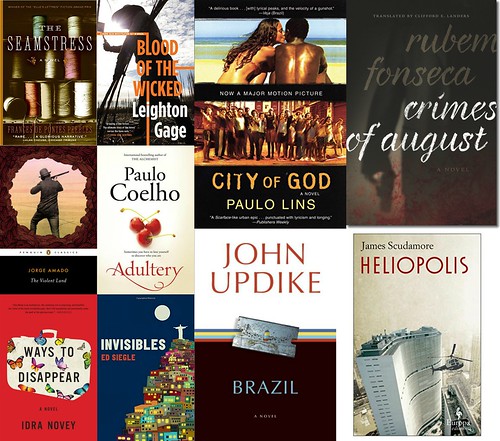 Magical realism is the catchphrase used to describe this book about two lovers from different sides of the track that fall in love on a beach in Rio.  A retelling of the ancient tale of Tristan and Isolde.

Slums, disco, cocaine, graphic violence, and gang wars all come together for this captivating novel which was later made into a movie of the same name.

Middle age woman decides her life is too boring and enters an affair with brutal S/M sex.  Yeah, not much more explanation is needed for this one 😛

Touching saga of sisters who long for a better life in the city.  A bit coming of age with family drama, this is a little known title.  Everyone who reads it, though, has glowing reports.  It would make an excellent book club read.

This is a crime thriller set in Brazil and is the first in a series (The Chief Inspector Mario Silva Investigations).  It’s similar to all other mass market fiction of this genre with the central mystery here being an assassination of a local Bishop.

This falls in the cozy mystery genre so there’s not a whole lot to say about it.  It stands out from some others in the genre simply because NPR and the NYT decided it deserved notice.  The author is a well-known poet and translator. Not my genre so I haven’t read this title (nor did I add it to my TBR).

This is a suspenseful thriller based on the turbulent events in Brazil in 1954.  With the tagline “a bullet that brought a nation to its knees,” it has a lot to live up to and, for the most part, it succeeds.

A personal quest novel where a man goes to Rio to uncover the tragic death of his father that occurred when he was younger.  This one is a little hard to get your hands on and the reviews are hit or miss so maybe leave it as one of the later choices TBR off this list 😉

Technically, a little bit of cheating here.  This novel actually takes place in Sao Paulo but I figured as a Man Booker nominee, it deserved mention.  It sheds light and comparisons on the differing worlds in urban Brazil…the poverty stricken shanty towns and the gated, super rich communities.